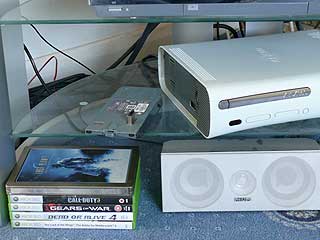 After 11 months my Xbox 360 has started to crash. After as little as 10 minutes of gameplay the screen will corrupt and freeze. Its happened on several games which I previously played for hours with no problems. All this comes on Easter weekend when its hardest to deal with these problems and a day before a friend who I haven't seen in a long time comes over. We were planning to spend most of the day playing Xbox as he's interesting in buying one.

First of all, if you live in the United Kingdom, visit www.xbox.co.uk NOT .com, then when you visit the support page you will get the UK contact information. Microsoft have an 0800 number to call them for support.

The support number was free and had a quick 2 step phone menu. I didn't have to wait at all to talk to an operator. The kind woman on the other end of the phone was good to talk to and knew and her stuff (such as guiding me through the menus to get my serial number). Initially I was asked to remove my HD and see if my Xbox 360 still crashed, and then phone back.

I did as was instructed, removed the power cord, then the hard disk which simply unclips. Then I began to play until after only 10 minutes my Xbox crashed again. It took even less time when I tried again. So it was time to ring back support.

The phone menu kicked me out this time, not making a connection, but a subsequent call got through with the same ease as the first time. After a nice short chat I registered my Xbox 360 so it could be returned for repair. I was told to ONLY return my console unit, no HD, no wires, no controllers. This made good sense to me. Also I would receive a label which I would have to print so that my Xbox could be collected and taken for repair.

One worry was what would happen to my downloaded content?. I've already paid for content which I've downloaded. I've read that DRM ties the content to the console and this can cause problems if you are issued a replacement console. I was told that once my Xbox was repaired I would be helped to download my 'paid for' content again. I've read about problems with this so it will be interesting to see if Microsoft have finally resolved this issue.