How to Build a Minecraft Piston Mob Grinder

A minecraft piston mob grinder collects mobs such as skeletons, zombies and spiders, and then channels them to a grinder where they are crushed by pistons. Mob drops such as arrows, bones, sulphur and string can then be collected. This step by step guide will show you how to build one.

Use the interactive guide below to build the mob grinder. After the first two spawning floors, repeat those floors as high as you like.

Mobs spawn on floors with a checkerboard of holes. These floors give enough space for mobs to spawn while also having a high chance they will fall down to the floors beneath. These floors are enclosed and dark so mobs can spawn even in the day time. Spawn floors are 3 blocks high. 1 block for the floor and two more providing just enough space for mobs to walk around (but not Endermen). In the screen shot below I've cut away the front of the tower to show the spawning floors. 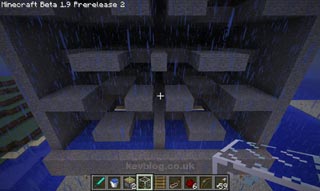 The floor above the grinder has four large water channels drawing mobs to the center. 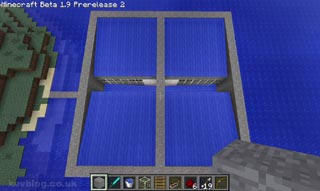 When mobs fall to the grinding floor, channels on the left and right of center draw them to blocks of 6 pistons. A redstone circuit makes these pistons compress and open constantly, crushing mobs that get between them. A small delay between each side of the pistons gives enough time for drops to be pushed to one side where they flow through a single block hole. 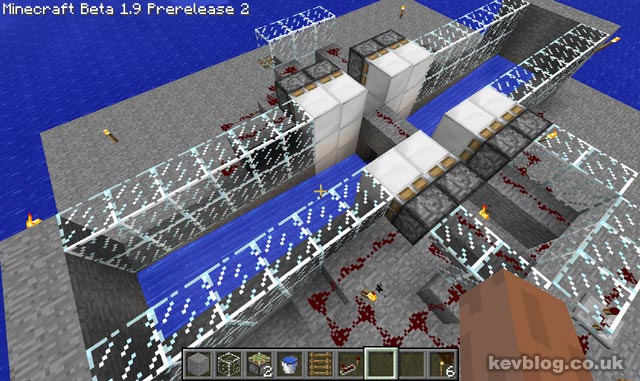 Switch or pressure plate A initially powers the circuit. Current flows through points 1, 2, 3 then 4. Repeaters delay the current and so it loops endlessly. Repeater B sends the current out of the loop to power the pistons to the left and right. From repeater B, current can travel 15 blocks before running out of power. Repeaters only allow current to travel in one direction. 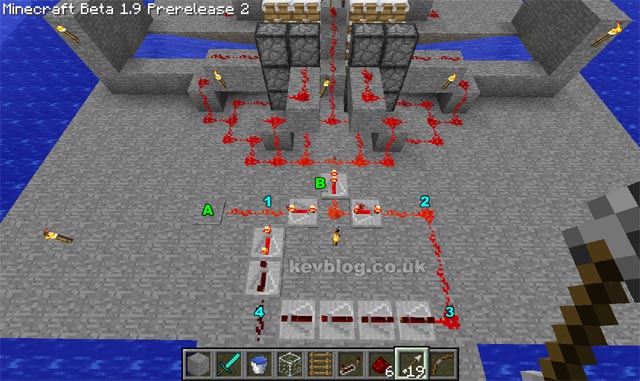 Current comes out from repeater B to sets of pistons 1 and 2. Current travels over bridge C and repeater D boosts the current up to a further 15 blocks to power piston sets 3 and 4. Repeater D also performs a vital function by delaying the pistons on one side slightly. This means mob drops get pushed to one side and so can flow through a single block hole (a 2 block would allow spiders through). 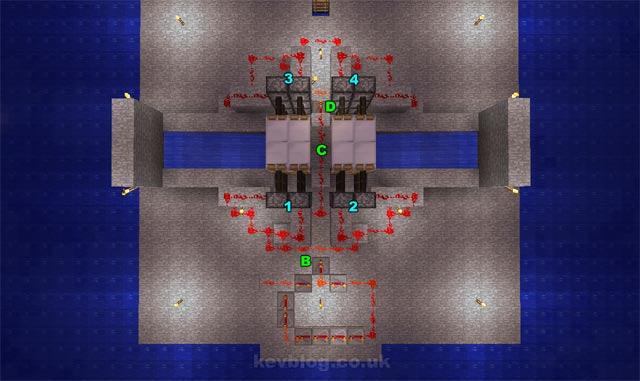 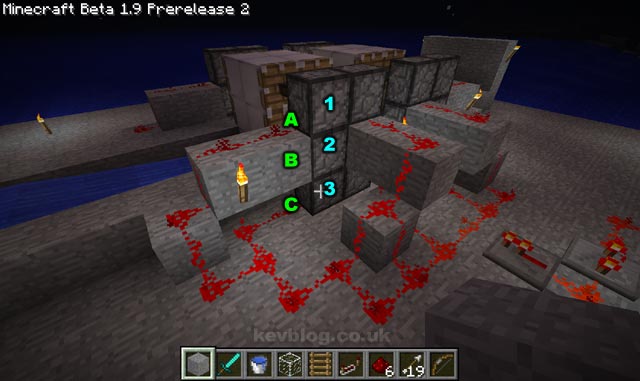 Restone wire A powers piston 1. It also powers block B which in turn powers piston 2. Redstone wire C powers piston 3, despite Minecraft's graphics showing it branching to the right where it also goes over the bridge to the sets of pistons on the other side. 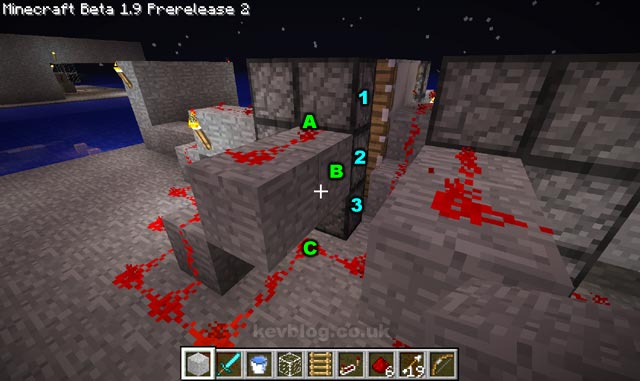 This small bridge takes the redstone to the pistons on the other side. You can also the single block beneath that stops spiders getting out while leaving a one block hole for items dropped to flow through. 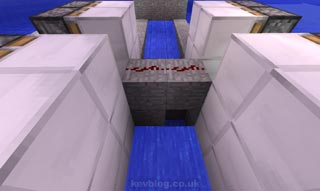 11 Dec 2012 02:46 by iKersh
Great guide/tutorial - I built a mob spawner tower from a YT clip to collect drops, took a while but works; this however is a bit more intricate but I like it, can't wait to see skeletons, etc. getting minced *pumps fist in the air*
11 Oct 2012 03:55 by ignalb
@Houten to flip a clock on/off i usually make that a sticky piston pushing a block in front of a repeater nd have redstone dust keep going on the other side (on) nd then retract it so there's air in front of that repeater (off). there's other methods nd u could even have it off be permanently on bt this is manual reset of u goin destroyin a redstone nd puttin it back
18 Mar 2012 01:00 by Drutar
I made a slightly more compact wiring method involving repeaters, if you want to see a picture of it, go to http://imgur.com/a/zvSya.
The first 2 pictures are the wiring in the machine itself, the other 2 are a cutaway version so you can see better.
31 Jan 2012 10:00 by Timhouse
Anyone having trouble with the loop circuit, right click your repeaters and turn the delay all the way up. This prevents the current from catching itself and just sticking in the on state.
24 Jan 2012 01:20 by fuccer
thank you very much! I`ve built this piston system on the anarchy PVP server deep under ground and it gaves me that old good powder to raid and grief others!
21 Dec 2011 09:30 by Silver
Spiders will get out through that hole anyways...
16 Dec 2011 11:40 by FatalError777
A nice interactive demo. Got to try this one out.
3 Dec 2011 12:30 by Houten
Can't seem to get the circuit to loop on/off. It just stays on so no piston movement.

Please help
2 Dec 2011 05:16 by Houten
Just wondering how is it looping, I'm doing something wrong and not sure what. The circuit just pushes piston but thats it