The Minecraft piston powered lighthouse uses sticky pistons to reveal and hide a netherrack bulb in sequence, giving the illusion that the light is circling round like a true lighthouse. It was developed by myself (Kevblog) and Bl0ke. We used Plotz online Minecraft modeller for the basic lighthouse model and then adapted that with the piston system. To look 'correct', all the redstone wiring had to go on the inside of the bulb meaning the circuit had to be very tight. See the lighthouse in action below:

How the piston lighthouse works

At the base of the lighthouse bulb, a row of 3 sticky pistons go up. From the roof, 3 pistons come down at the same time. This hides the bulb at one of the 4 sides. When the pistons lose power, the bulb is revealed again. The redstone power loops in a circle using delayed repeaters, and each side follows the other in turn. The base and roof circuits are the same and are initially powered at exacly the same time to run together.

See the screen shot below. The power initially comes in at the bottom left. A repeater directs it to the left hand (9 o'clock) set of 3 pistons. The power comes out into a repeater with the highest delay and then powers the top (12 o'clock) set of pistons. This process repeats around the the right hand and then bottom set of pistons then continues in and endless loop. The intial power comes from a switch and so has died out (a constant power source would have left all the pistons on all the time). 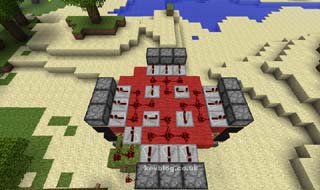 The lighthouse 'roof' circuit. The base is the same. 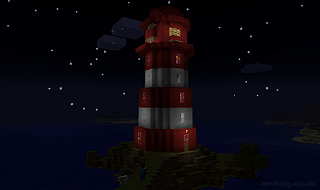 The tight circuity means there isn't enough room to keep the wiring which powers the roof circuit on the inside. It juts out slightly, so we've placed this on the least likely to be seen side of the lighthouse. This 2x2 spiral of blocks takes the power from the bottom to the top. I know 1x1 vertical power can be acheived, but it also had a delay. In this case the top and bottom circuits must be powered at the same time. A lot of people are requesting vertical redstone wiring. If Notch were to implement this, such problems would be solved.

2 Feb 2014 05:27 by Uskaanax
How about adding a solar detector so that it turns off during the day and on at night?
5 Feb 2013 09:07 by Levon Clark
Attempting to do this, can someone link me to screen shots of their light house / and or top and bottom circuitry.
13 Jan 2013 09:18 by Alshain
You will be able to "perfect" this design by using the upcoming redstone block and some sticky pistons. Remove the 4 inner repeaters and redstone wires. Push a redstone block up where the removed wire is, control the pistons from below (or above) in the same circular fashion using repeaters.
29 Jun 2012 01:49 by bubbles
cool looks awsome
12 Apr 2012 12:38 by CDP5883
Now that Redstone Lamps have been released, I found that replacing the sticky pistons and the blocks they move with the lamp blocks works better for me than the piston design. It requires fewer overall blocks and is easier to build if you have access to the Nether (that or I just can't find slimes to save my life). The main difference is that it only lights one side at a time instead of only dimming one side at a time.
19 Feb 2012 03:48 by 03simock
hey, just a quick thing, using redstone torches from the botton to top layers the circuit can fit inside the circle. all that needs to be done is adding repeters to and from the torches and put them on full delay then put the top layer on full delay. good design tho :)
7 Feb 2012 11:10 by Sev
Just stick a button on the circuit somewhere, the single pulse given will start off the circuit and keep it going continuously
5 Jan 2012 04:05 by Scotty
How do you power this thing? Surely to get the on off effect you'd need a separate piston somewhere controlling current flow or something? Please tell me how to activate this thing. I've spent ages building it now it's just sitting there uselessly.
30 Dec 2011 08:08 by Anatoly
Hello!
I'm trying to build your lighthouse but I cant decide one problem: when I power this circuit it doesnt repeat, pistons make only one turn. how to resolve it>?
13 Dec 2011 08:19 by robber364
i made one where the wiring is inside, used your generator for the tower itself. if u want, stoot me an email and we'll compare notes.
robber364@live.com
27 Sep 2011 11:30 by Prudence
Well macaadmia nuts, how about that.
26 Sep 2011 02:43 by bweber93
just as a comment to those who are building this, in that photo the repeaters on the pistons should be in a series of 2, 3, then 4 clicks to give the rotating appearance. If you build straight from picture they will just compress together at same time. Just wanted others to not run into my problem :D
17 Sep 2011 02:58 by darkdog44
Is their any way you could do a video or full explanation about how to power both floors of pistons at exactly the same time? I can get them to work but not at the same time
11 Sep 2011 06:53 by MastaMina
How do u turn it on? I've tried most things but they don't work. Plz tell me how to activate it.
24 Aug 2011 10:10 by Kevblog
@Kayli, I used: diameter 9, floors 2 and step every 2
23 Aug 2011 11:17 by Kayli
Wow!! This is amazing! Can I ask what diameter you used as I'd love trying to recreate this :) Thanks! Keep up the amazing work!
22 Aug 2011 09:50 by Zeph
Hi there! I'm new to Plots but already adore it! Thank you for what you do!
I think i have found an easy and hidden way to connect the upper and lower levels together. If you are interested, drop me an email at: MyNick@MyWebsite.co.uk, where the My variables are from this comment :D
22 Aug 2011 12:38 by phartz
MCedit schematic would be great :D
22 Aug 2011 12:10 by brickmaker12345
EPIC!!!!!!!!!!!!!!!!!!!!!!
06 Jan 2015
Elite Dangerous: My Experience So Far
05 Jan 2015
Elite Dangerous: Keyboard Controls
16 Dec 2012
Build a Giant Snowman in Minecraft
27 May 2012
I put petrol in my diesel HDi and survived
23 Oct 2011
Minecraft Chicken Grinder (Belle End Farm)
09 Oct 2011
How to Build a Minecraft Piston Mob Grinder
23 Jul 2011
Minecraft Piston Lighthouse
16 Jul 2011
Minecraft: How to farm slime balls from slimes
10 Jul 2011
Solution: video too dark after YouTube upload
02 Jun 2011
Build a Minecraft Wizard Tower
15 Apr 2011
How to build a hollow sphere in Minecraft
25 Mar 2011
Package for iOS with AIR 2.6
10 Feb 2011
Create 3D Array in Actionscript 3
30 Jan 2011
How to build a Minecraft Mob Grinder
16 Jan 2011
Xbox Kinect distance from TV
05 Dec 2010
Minecraft vs Warcraft