Minecraft: How to farm slime balls from slimes

Pistons are here in Minecraft but if you want to want to make sticky pistons, you're going to needs slimeballs, and that means finding one of the most elusive of mobs in Minecraft - slimes.

Why are slimes so rare?

Firstly, slimes will only spawn in the bottom 16 layers of the world. You'll need to dig deep to find them. Secondly, slimes will only spawn in certain chunks. A chunk in Minecraft is a 16 wide, 16 long and 128 blocks high area. When creating chunks in the world, Minecraft decides if a chunk can spawn slimes, and the chance of this is roughly 10%. Lastly slimes are reportedly 90% less likely to be picked for spawning as opposed to the other mobs such as creepers, zombies and skeletons.

There's no big secret here. This article is more about sharing my experiences (with screenshots) rather than revealing some deep secret of slime farming. Basically I dug out a huge cavern at around bedrock level. The idea is to open up a large area so there's a good chance it covers many chunks where slimes can spawn. My cavern is 2 blocks high, giving me enough space to walk around and allowing space for slimes to spawn (they need only 1 block). By lighting the cavern, other mobs won't spawn. Slimes and other mobs share the limit of mobs that there can be at any 1 time, so a lit cavern means less of the other mobs and so more chance of slimes. Another idea behind making a cavern is you get a good view distance and can spot spawned slimes, get to them, and kill them quickly. Like other mobs, slimes won't spawn within 24 blocks of the player so you need to take that into account too. 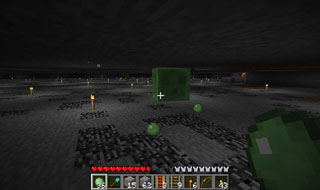 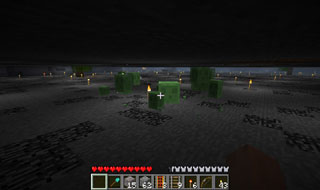 I took most of a weekend digging out my cavern. I found it quite fun actually, finding a good amount of gold and diamonds along the way as well as more than enough coal, iron and redstone. I sealed off and dug around lava pools, although occasionally, if small enough, I opted to fill them in with gravel and then dig them out later. The same for water pools. Where these left large enough gaps in the roof of my cavern I planted trees in dirt. Partly for a laugh but also to have a sustainable supply of wood. It wasn't too long before I saw my first slimes, so I knew I was revealing areas in chunks that could spawn them. As I dug out more I eventually saw my first 'waves' of quite a few slimes at once. I'm not sure what the deal is here, but I certainly got plenty of slime balls. Then I wouldn't see any slimes of quite a while. I just kept digging out my cavern in these periods.

Slimes come in different sizes and only when killing the smallest slimes is there a chance for slimes balls to drop. Each larger slime slits in to 4 when killed but only if the damage you deal is less than the health of the smaller slime it will split into. For this reason punch or use low damage items/weapons to kill slimes. 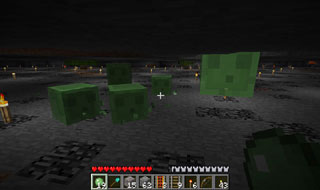 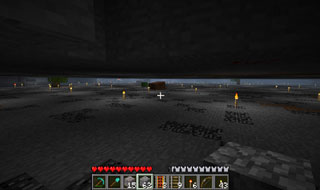 In the end my cavern was so big it was quite a trek to walk around it so I built a powered minecrart track in a loop. Now I like to travel around it in circles hoping to spot slimes. Sometimes I do, often I don't. That's random for you. However in the end I got almost 200 slime balls in just my spare time over a weekend. That's a lot of sticky pistons. 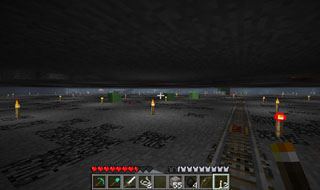 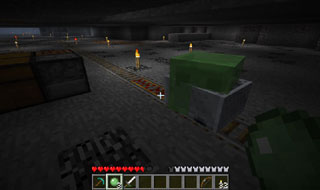 A slime ends up in my minecart

30 Sep 2012 10:45 by FrogTwig
Thanks this was really helpful! :)
28 Jul 2012 09:22 by rage x
i have blown up at least 3000 blockes with tnt cant find any slimes if u have xbox live my name is rage x infinite can u help me please
26 Jul 2012 03:00 by popojojo890
It came! :D
7 Jul 2012 10:04 by Fotato
There will be an update for the Minecraft Xbox 360 Edition very soon and they are adding pistons which you can use them for to make sticky pistons
21 May 2012 06:11 by popojojo890
I have the xbo 360 version of minecraft and i cant find a single use for my slime balls wjat do i make with them?
20 Feb 2012 06:48 by kitronix
i have my cunk it spawned a small slime so i walled off the chunk from the rest of my cave i put glowston across the second layes of the wall and put glowstone on the floor (about 6) but when i go minning and come back nothing is there please tell me do i have to be in a certain range
12 Feb 2012 08:11 by SeltzerCole
Thanks for the tips even though its outdated according to wiki. I used slimefinder to find which chunks on my map were even capable of spawning slimes and it saves time so you dont have to dig out giant area's that cant even spawn slimes. Happy slime-ing.
3 Jan 2012 02:31 by chobbis2
I know why it's not working for you, I tried using that method and it didn't work. :(