Build a Giant Snowman in Minecraft

The snowman is a new model in Plotz Modeller for Minecraft and with just a few clicks you can design your own snowman and use Plotz to see how to build it layer by layer (you can even print out your design). 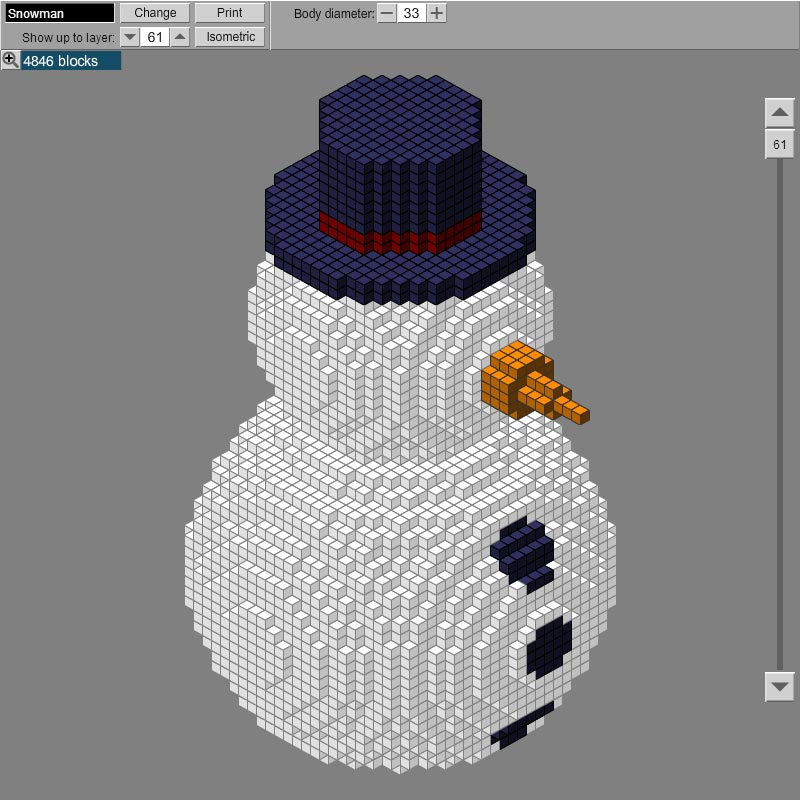 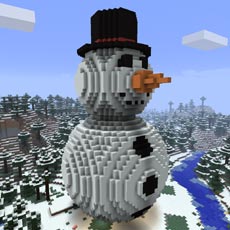 Start by visiting the Plotz main page and click Take me to Plotz (Plotz requires Flash installed in your web browser). Choose the Snowman model. All you need to do now is choose a body diameter. From this, the size of the head, hat and nose are all calculated for you. I chose 33, making my snowman a total of 61 blocks high, ideal to fit in Minecraft's ground level to sky limit of 64 blocks. You can see the model height in Plotz in the 'show up to layer' box and also the slider on the right.

You can print your design from Plotz which will show a layer by layer plan of how to build it from the ground up. Alternatively you can work on screen which was what I did, adjusting the 'show up to layer' value or layer slider and building a layer at a time. The screen shots below show 16 blocks up in both Plotz and Minecraft. 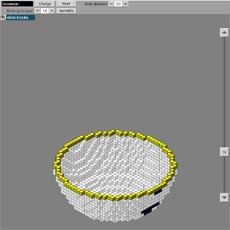 Plotz snownman up to layer 16 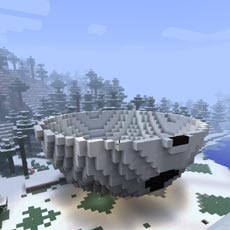 Minecraft snownman up to layer 16

I found a snow biome and cleared a decent sized area, then started building from the ground up. Orange wool is a good material for the nose, as pumpkins can only be placed on top of another block. I added my own eyes and mouth as Plotz doesn't calculate these finer details. Its also nice to add some of your own design.

21 Aug 2013 03:52 by MCD
Technically, you could place the pumpkins and then remove the supporting blocks. Of course, you'd have the faces to contend with, but careful positioning could hide those.
4 Aug 2013 08:02 by Kevblog
I'm so silly Athlov - fixed
10 Apr 2013 06:26 by Athlov
FYI on the Torus, you have the radius confused for the diameter. The radius is the distance from the center to the outside edge, and the diameter is the distance from one side, passing through the center, to the other side.
17 Jan 2013 09:13 by Kevblog
Thanks and glad you like the snowman! I had fun with that one too. Technically its possible to add that skull to Plotz but I'd be happier with my own design so I'm not using someone else's work. There's some big changes coming to Plotz including ellipsoid and torus models so I'll be focusing on those first.
13 Jan 2013 01:31 by xbox live kingz
hi loving the the snowman just wondering if it was possible for you to add a skull in to the program a bit like the skull on this web page http://www.minecraftforum.net/topic/136010-plans-for-a-large-skull/ I cant seem to get my head around the plans he has released but plotz simplifies it for me cheers and keep up the good work
06 Jan 2015
Elite Dangerous: My Experience So Far
05 Jan 2015
Elite Dangerous: Keyboard Controls
16 Dec 2012
Build a Giant Snowman in Minecraft
27 May 2012
I put petrol in my diesel HDi and survived
23 Oct 2011
Minecraft Chicken Grinder (Belle End Farm)
09 Oct 2011
How to Build a Minecraft Piston Mob Grinder
23 Jul 2011
Minecraft Piston Lighthouse
16 Jul 2011
Minecraft: How to farm slime balls from slimes
10 Jul 2011
Solution: video too dark after YouTube upload
02 Jun 2011
Build a Minecraft Wizard Tower
15 Apr 2011
How to build a hollow sphere in Minecraft
25 Mar 2011
Package for iOS with AIR 2.6
10 Feb 2011
Create 3D Array in Actionscript 3
30 Jan 2011
How to build a Minecraft Mob Grinder
16 Jan 2011
Xbox Kinect distance from TV
05 Dec 2010
Minecraft vs Warcraft