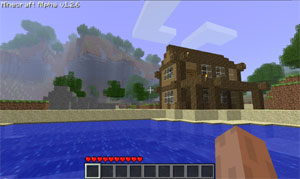 My cabin and base of operations

My mine cart track

I've played World of Warcraft (WoW) on and off for years but now, on the eve of latest World of Warcraft expansion, I've found something I think is better ... Minecraft. Minecraft places you in a massive 3D world where you can create and destroy the blocks that make it up. There's a day / night cycle lasting about 10 minutes each, and at night, the monsters come out. I usually start by harvesting wood from a tree. With that I make an axe to chop wood quicker. Then I make a pick axe and start mining for coal, iron and other resources. I build a home base to do my mining operations from, craft weapons and armour and create more structures. But this is just how I might play the game - its really up to you and that's what's so compelling about Minecraft. You can read a good Minecraft review here.

Here are some of the reasons Minecraft has completely taken my attention away from Warcraft.

Creativity and the ability to change the world environment. Minecraft is a creative game. You can reshape the world and build your own structures. You can make traps, circuits, railways (or roller coasters) and machines. In World of Warcraft you cannot make permanent changes to the world environment and don't have a dwelling or home to make your own.

Individuality. In Warcraft I found it very hard to stand out in a very large crowd. My Warlock looks like almost every other Warlock and has the same weapons and gear. Even my talents are pretty much the same. This is almost unavoidable as all players naturally gravitate to getting the best / optimum gear, talents and spells. In Minecraft you get your individuality from how you play the game and what you build. When I see another Minecraft player's world, its always different.

No more grind. Well kind of. I still grind for minerals in Minecraft, but it sure doesn't feel like a grind and I certainly don't spend as long at it. In WoW I did some epic grinds lasting days and weeks. More fool me I guess.

Gameplay and storyline. In Minecraft, gameplay is open ended. The game is what you make it. For me it started out as a struggle for survival. Then I started on my home and base of operations. Then I started a large strip mine project to get more resources. I've now moved on to making a mine cart track running across the landscape in a straight line. Each 256 metres along I'm making a new base and exploring, looking for caves and treasure to gain the resources for the next stretch.

World Size. I was always impressed with the size of the World of Warcraft world however the Minecraft world can be as large as 8 x the surface of the Earth.

Cost. The alpha version of Minecraft is just a 1 off cost of 10 Euros.

Supporting the indie developer. The developer of Minecraft has become very rich in a relatively short time period. I like the idea that by buying and playing the game I'm supporting an independent game developer rather than a member company of a huge media empire.