Elite Dangerous: My Experience So Far

I'll never forget the first time I saw the original Elite game. I was around 15 at the time, at my local computer club. The 3D vector graphic space game seemed ahead of its time compared to other computer games. I was absolutely fascinated. Eventually I was able to play Elite on my Commodore C64 and later on my Amiga. Now, many years later, I've got my hands on Elite Dangerous and after playing it in my limited spare time, I want to share my experiences and a few screenshots too.

The freedom of play that Elite Dangerous offers certainly appeals to me. The game is huge, with a full scale recreation of the Milky Way containing 400 billion star systems. Where you go and what you do is up to you. With the limited cargo space of the default ship, I started taking on missions offered at space stations to earn some credits to progress. My target, the iconic Cobra MK III ship from Elite game I'd seen so many years before. Before I knew it, I was plotting routes across systems, flying my ship through hyperspace and docking at various stations. 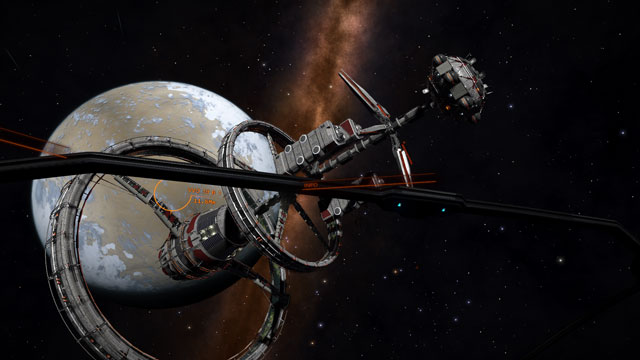 Some of the more lucrative missions offered to me included transporting slaves, but where to find them? I discovered you can filter the galaxy map to show systems with prison planets and so that's where I went. I ended up at a small unsanctioned outpost in the Ngaliba system. It was Kingsmill Settlement. I'll never forget as I docked seeing red holographic projections of eye-patched pirate skulls from a mast at the top of the station. I did many missions for the local factions, including transportation and delivery of slaves. I found that Ngaliba's anarchy status left me free to find and then sell stolen cargo on the black market, without fear of fines from law enforcement. In anarchy systems there is no law enforcement. I even pirated a few vessels. Eventually I became friendly then allied with some of the local factions. It felt like quite an achievement. Soon I had my Cobra MK III, and later, when I had the cash, came welcome upgrades to the systems and weapons. 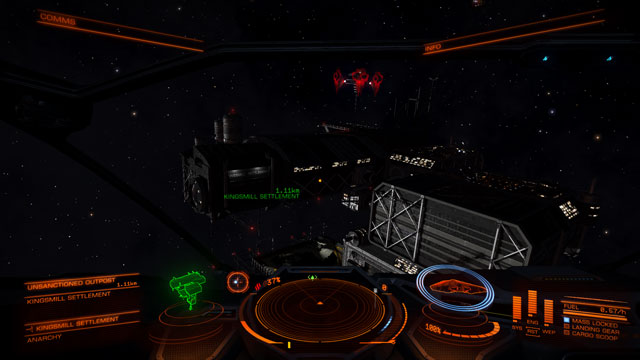 Feeling like a change in direction I decided to try my hand at trading. Its a good way to earn a lot of money for the more expensive ships and equipment in the game. Still in my Cobra MK III I equipped larger cargo racks allowing me to transport more goods from station to station. I even sold a few systems I didn't need such as my docking computer. I can dock manually and that slot can be a cargo rack instead. More cargo means more profit. Right now I'm still trading. I've earnt enough to buy myself a second ship, a Type 6 Transporter with even more cargo space. Still with limited funds, I'm risking a lot, spending all my money on goods and not leaving money to replace my ship should it be blown up by pirates or I crash it into a space station. Its a risk I'm willing to take to maximise my profits. 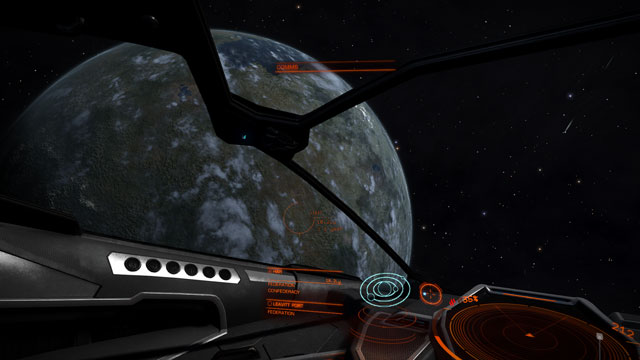 Looking out my side window at Har. At the orbiting space station I'm selling metals such as gold and silver.

Where to next? I've been reading a lot about exploration. With a decent discovery scanner you can fly to systems and scan them for astronomical objects. From there you can get closer to these objects and use a surface scanner to get more information and discover the wonders of the galaxy. I plan to buy a cargo scoop allowing me to refuel from stars and wander far off the beaten track, away from any space stations. I've read of people travelling thousands of light years across the galaxy taking hours of game time. They work their way into the deep unknown to discover different stars, earth like planets, black holes and more. I find the concept fascinating. Should you make it back to a space station, such information can then be sold. While perhaps not as lucrative as other styles of play, I think the whole experience will be reward enough. 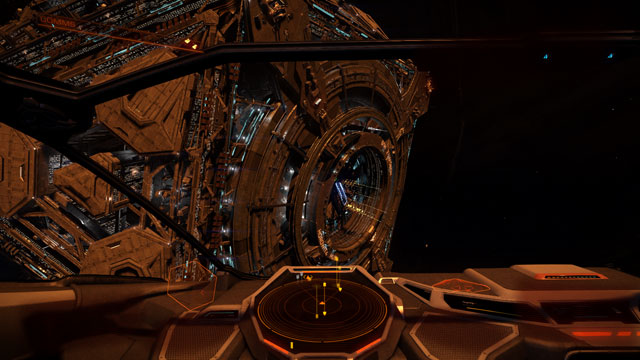 Horowitz Hub Space Station catches the light of its nearby star. 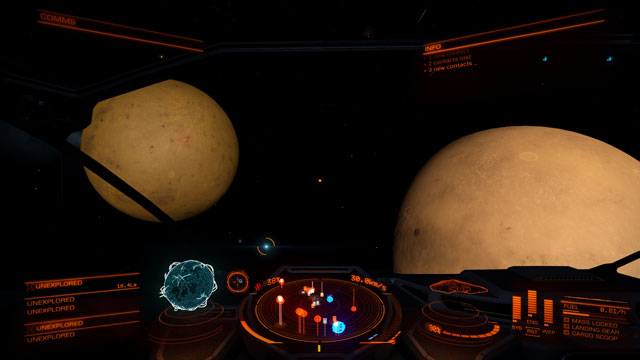