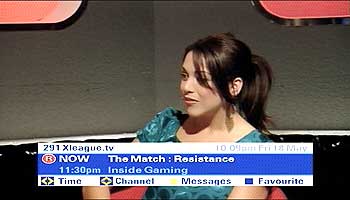 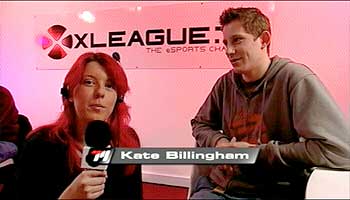 As often happens I spotted a new channel on 'the Sky' the other night, but for once this one seems quite interesting. I stumbled over XLEAGUE.TV, channel 291, (Update: NOW 279), when I stepped one channel back from my bookmark on the movies channels (at 301). Gaming action from the new PS3 title Motor Storm instantly caught my attention. As Sky viewers will know, apart from a few programmes such as GAMER.TV, there's precious little to coverage of computer and console games, let alone a dedicated channel.

So what does XLEAGUE.TV offer? Well its a new channel, launched on May 16th, so I guess they need chance to build up their programme lineup, which while appearing a little sparse on the ground features some quality stuff. The main hook for me has been The Match. Here we get see to see lengthy multiplayer gaming action on such games as the aforementioned Motor Storm, Halo 2 and Gears of War. The presenters and guests at least seem to know what their talking about when introducing the gamers, games and providing commentary on the gaming action.

Other programmes I've seen include The Chart and Inside Gaming which features developer diaries and interviews. The channel is broadcast in widescreen which is very sensible given the nature of today's next-gen consoles. Let's hope they build upon their good start. There's a whole website too at (where else) XLEAGUE.TV.

26 Sep 2009 02:04 by MaxxyT
umm i dont know because latly i cant find the chanel on tv so i dont know wats goin on it was pulse but now i cant find it
17 Mar 2009 07:50 by ReazoN
Where has it gone?
I can't find channel 208 on SKY anywhere
4 Mar 2008 12:13 by chiniple
it is now called pulse on channel 208
5 Dec 2007 02:17 by i hate gaming its gay
In the United Kingdom, the term school refers primarily to pre-university institutions, and these can, for the most part, be divided into pre-schools or nursery schools, primary schools (sometimes further divided into infant school and junior school), and secondary schools. There are various types of secondary schools which include grammar schools, comprehensives, secondary moderns and city academies. In Scotland school performance is monitored by Her Majesty's Inspectorate of Education. Ofsted reports on performance in England and Wales.

In much of the Commonwealth of Nations, including Australia, New Zealand, India, Pakistan, Bangladesh, Sri Lanka, Kenya, and Tanzania, the term school refers primarily to pre-university institutions.

In North America, the term school can refer to any institute of education, at any level, and covers all of the following: preschool (for toddlers), kindergarten, elementary school, middle school (also called intermediate school or junior high school, depending on specific age groups and geographic region), senior high school, college, university, and graduate school.

In the US, school performance through high school is monitored by each state's Department of Education. Many of the earlier public schools in the United States were one-room schools where a single teacher taught seven grades of boys and girls in the same classroom. Beginning in the 1920s, one-room schools were consolidated into multiple classroom facilities with transportation increasingly provided by kid hacks and school buses.

In much of continental Europe, the term school usually applies to primary education, with primary schools that last between six and nine years, depending on the country. It also applies to secondary education, with secondary schools often divided between Gymnasiums and vocational schools, which again depending on country and type of school take between three and six years. The term school is rarely used for tertiary education, except for some upper or high schools (German: Hochschule) which are more accurately translated as colleges.

Please note in most countries there is one more classification called Business Schools which are normally Colleges providing Management Education.

8 Nov 2007 11:06 by XTGxVeNoMxXx
yes it rocks i love halo3
25 Oct 2007 10:48 by haloshczznigger
xleague.tv is the best channel on the air, it pichers gamer aganst gamer for money.Some of the best games are put on this channel to see who are the best gamers for this game and some game like halo 3, gears of war, doa1-4 and lost planet to.And i thank it is the best gamer channel for the year 2007 and to come.