There's lots of Malls in Metro Manila, Philippines - many of them SM Malls, the Philippines largest shopping mall developer. The SM Mega Mall is located in Ortigas Center, Mandaluyong City. This area has alot of Skyscrapers, a favourite of mine to photograph. As it was difficult to stop on the streets I took advantage of the SM Mega Mall's multi-story car park, taking my photos looking out by holding my camera high over the walls. 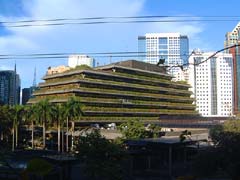 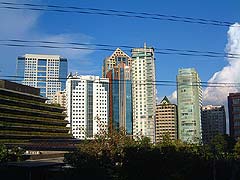 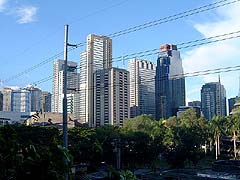 The mall itself was great. I found a good surf shop and bought a Quicksilver and Rip Curl t-shirts for quite cheap prices. Later I bought my first DVD in the Philippines (region 3), Curse of the Golden Flower for about £6, not bad when its just finished playing at the cinema back home in Britain. Other items such as jeans were not so cheap, but they were designer brands. There were some nice places to eat too and we all went to SBarro where I bought dinner for the whole family to thank them for looking after me so well (tomorrow is my last day).

On the way back we saw the usual street vendors walking around in the traffic, sometimes they are children. Its a hard decision to make whether to buy water or flowers or whatever from them. I've been told they might well be working for crime syndicates and will probably see little of the money they earn.

Finally on my way back we stopped at a nice piece of corporate art outside Ciendesitas shopping mall, one of the smaller malls. I like this circle of stone lit up in blue neon, especially of course at night. Night photography is always hard, and unless you use a tripod you have to hold the camera very steady as the aperture stays open longer to let in more light. I took a number of shots, several of which came out quite clear. 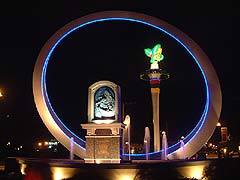