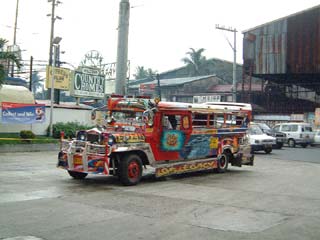 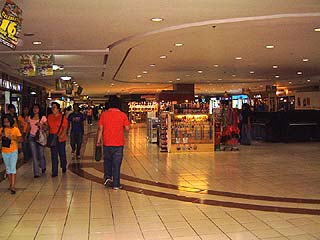 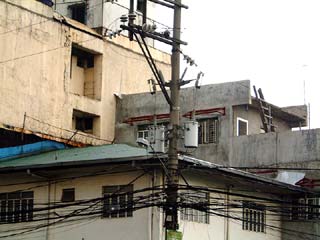 Today I arrived at Ninoy Aquino Airport, Manila and travelled to Cainta Rizal where I am staying with a Filipino family. Metro Manila is the name for the whole Manila area including Manila City and its 16 surrounding Cities and municipalities. A 2000 census revealed this area has a population of almost 10 million people living in just 636 sq.kilometers making it the 24th most populous metropolitan area in the world (source: wikipedia).

I am staying with a typical Filipino family. The house is small and there are already 6 people staying here. There is no hot water, but you do not really need it as its so hot here a cold shower is always welcome. The family are very kind and the food is very good. Most of what I have tried I really like, especially the meat and rice dishes. Dinner is served chinese style with lots of plates of food on a carousel where you can pick and choose what you want to eat. Today I tried beef adobo, a spicey dish and pork hamonado, also spicey but more sweet. For sweet I had homemade tiramisu. The heat has stifled my appetite a bit, but I'm sure I will get it back.

As I arrived first thing in the morning I was able to make a start seeing the Philippines after dinner. Unfortunately I suffered a cat bite (I think I trod on it as I got up from dinner) so this meant I had to go to town for the first in a course of rabies shots. Still, it was an experience!

There is much poverty here and travelling through the busy traffic I could see many streets with tightly packed houses. Some areas are fully of squatters in shanty towns - photographs of which I hope to take later. This is a completely differentl world to what I am used to.

The city streets are full of various forms of transport. The most common public ones are jeepneys and tricycles. Jeepneys are brightly coloured buses, each with a custom paint job. Tricycles are adapted motorcycles with cabs to carry up to 4 people. The streets of Metro Manila are very busy even late at night.

After getting my first rabies shot (ouch in pain and money) I went to Santa Lucia Mall, the local mall to Cainta Rizal which is the province I am staying in. Even this 'small' mall is very big covering 4 floors, the top floor home to a cinema and arcade. The mall is clean, bright and most importantly - cool! On the bottom floor is a kind of market place where fake goods such as computer software, DVDs and designer clothing and accessories are all sold openly - even though the upper floors have much of the same things but at far higher prices of course. I saw some nice Oakley shades for sale, but being fake I wasn't sure if they provided good UV protection, so thought better of it. Shopping is great and there's a wide selection of pretty much everything. Prices are very cheap compared to Britain. Starbuck's for example is half the price.

I changed some money while I was there at one of the many money exchangers (pawn shops do this also). There are strict laws governing currency exchange although it seems the smaller ones are more lax about security. Deeper into the city you will probably find that to satisfy the law you will need a photo ID to change your currency. Where I went however I did not.

There's lots more photos to come but I had to include a shot of some of the crazy mixed up power lines which are all over the streets. Later that night I saw a TV advert warning people against stealing power (apparently by getting someone to clip straight into the powerlines) and that they would be prosecuted for the theft of electricity.

Enjoyed reading you blog about the Philippines. I have been to the Philippines 2 times and I love it. The people are very friendly and open and welcoming. The second time I went there I worked at a childrens home in Antipolo (voluntary). Antipolo is another suburb about 10 minutes from Santa Lucia.
06 Jan 2015
Elite Dangerous: My Experience So Far
05 Jan 2015
Elite Dangerous: Keyboard Controls
16 Dec 2012
Build a Giant Snowman in Minecraft
27 May 2012
I put petrol in my diesel HDi and survived
23 Oct 2011
Minecraft Chicken Grinder (Belle End Farm)
09 Oct 2011
How to Build a Minecraft Piston Mob Grinder
23 Jul 2011
Minecraft Piston Lighthouse
16 Jul 2011
Minecraft: How to farm slime balls from slimes
10 Jul 2011
Solution: video too dark after YouTube upload
02 Jun 2011
Build a Minecraft Wizard Tower
15 Apr 2011
How to build a hollow sphere in Minecraft
25 Mar 2011
Package for iOS with AIR 2.6
10 Feb 2011
Create 3D Array in Actionscript 3
30 Jan 2011
How to build a Minecraft Mob Grinder
16 Jan 2011
Xbox Kinect distance from TV
05 Dec 2010
Minecraft vs Warcraft