To turn off Sky+ Auto Standby, simply press 'Services' on your remote, go to Sky+ Setup and turn off Auto Standby. Finish with 'Save New Settings'. 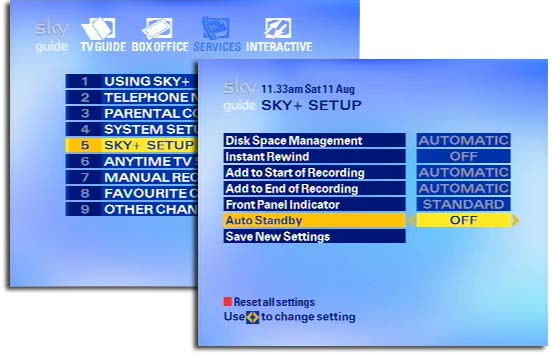 In my stats I've seen a few people arriving at my site after entering search keywords for how to turn off Sky+ auto standby, so I thought I'd blog how to do this. Auto Standby is a relatively new feature of Sky+ which jumps on the green bandwagon to turn off your Sky+ box. The first time I noticed it was when I woke and found my TV had auto turned off due to a lack of picture. Eventually I saw the message informing me that the box was about to go into auto standby mode. How Sky+ decides this I have no idea, because I've even seen it come onscreen shortly after changes channels, so that hardly indicates my box has been left unattended.

If you're looking to program your Sky remote to operate your TV, find Sky remote codes here.

8 Feb 2013 04:57 by bigdeek7
on the new 2tb box , do same as above then press the green button to save the settings , save yourself a lot of missed recordings
11 Mar 2009 09:41 by Helen
Hi. I've had Sky+ fitted today and I don't have the 'Auto Standby' option my my Sky+ menu. I have the other 6 options shown in your screen dump, but the Auto Standby isn't there. Do you know if it's been moved since your post?? Thanks, Helen x
4 Mar 2009 09:30 by Adrian
As stated above, some of the things I record have had mysterious "power cuts" and the end has been missed - but not any more. Thanks for this tip.
18 Dec 2008 05:16 by LB
It's a real nuisance. I had the same thing happen with my Humax FreeSat box. I leave it on BBC1 so it will record the early news, weather and traffic, so I can watch in FF Mode when I wake up (saves me having to listen to all the useless blah blah). It turned itself off in the early hours so all I had was a blank screen. If they really want to save power, why not reduce the amount of useless drivel they transmit??? Much more effective! Will now dig around to try and turn off the feature.
27 Dec 2007 10:27 by Wolf
I've turned my auto standby off as I found it messed up my recordings & class them as power cuts even when I've had none!
I know this as nothing else has suffered a power cut & no resetting of 1/2 dozen clocks on my equipment!
Now my recordings are without a hitch!
06 Jan 2015
Elite Dangerous: My Experience So Far
05 Jan 2015
Elite Dangerous: Keyboard Controls
16 Dec 2012
Build a Giant Snowman in Minecraft
27 May 2012
I put petrol in my diesel HDi and survived
23 Oct 2011
Minecraft Chicken Grinder (Belle End Farm)
09 Oct 2011
How to Build a Minecraft Piston Mob Grinder
23 Jul 2011
Minecraft Piston Lighthouse
16 Jul 2011
Minecraft: How to farm slime balls from slimes
10 Jul 2011
Solution: video too dark after YouTube upload
02 Jun 2011
Build a Minecraft Wizard Tower
15 Apr 2011
How to build a hollow sphere in Minecraft
25 Mar 2011
Package for iOS with AIR 2.6
10 Feb 2011
Create 3D Array in Actionscript 3
30 Jan 2011
How to build a Minecraft Mob Grinder
16 Jan 2011
Xbox Kinect distance from TV
05 Dec 2010
Minecraft vs Warcraft