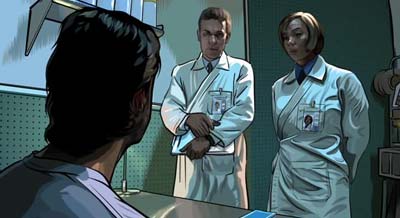 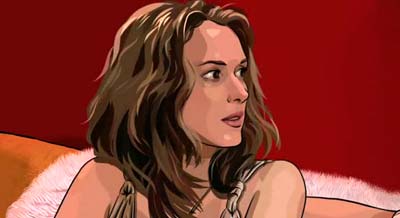 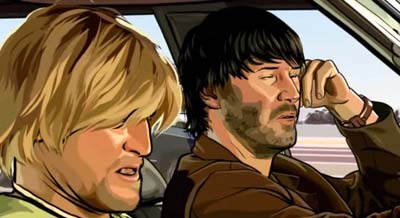 A Scanner Darkly is a sci-fi story centered around 5 friends living in a drugs sub-culture set 7 years in the future. A mysterious and highly addictive Substance D has become the drug of choice and the center of an addiction epidemic. One of the friends (Keanu Reeves) is a narcotics officer sponsored by drugs rehabilitation company New Path. From here the story unfolds as Reeves' mental health declines from use of Substance D.

The whole movie is shown in a cartoon style created by computer processing of live action. I found the resulting visuals stunning, bright and colourful (despite the often run-down world being portrayed). These visuals add to the effect of the world seen through an addict's eyes, often surreal and lacking depth. During many panning and zoom shots, objects appear to float slightly above their backgrounds as if in a dream world of hallucination.

As the story progresses we are treated to what I found were some hilarious and bizarre scenes of interaction and conversation between the friends, obviously driven by shear drugs induced paranoia. Reeves performance is well complimented by a great cast including Rory Cochrane, Robert Downey Jr., Winona Ryder and Woody Harrelson. Little Miss P says Robert Downey Jr. is still sexy as a cartoon and I've got to say that Winona Ryder never looked better!

On a scale of 1 to 5 I'd give this movie a 3. I found the story a little predictable and often slow although that does give you time to take in the visuals and ponder on the thought provoking world they show.