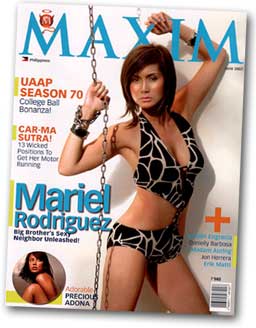 Wowowee co-host and Pinoy Big Brother presenter Mariel Rodriguez has appeared in the June 2007 edition of Maxim Magazine (Philippines). Mariel (born Maria Erlinda Termulo) talks about her career, Wowowee and her personality as well as posing for photographs. Such a move might be considered quite bold by more conservative Filipino women and even Mariel herself was having seconds thoughts but is happy now she's done it.

Mariel began her career in Rouge, a TV action/adventure series from Singapore for MTV Asia about an all female rock band also working as operatives for a crime busting organisation. She was noticed in the show and became an MTV VJ. Later she was a host in Extra Challenge, a Filipino reality show. Now she's perhaps best known for hosting Pinoy Big Brother and the noon-time entertainment show Wowowee alongside co-host Roxanne Guinoo who also appeared in Maxim Magazine, in March 2007.