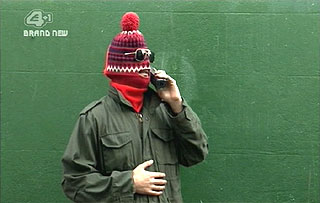 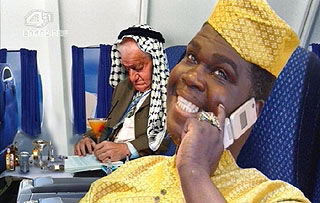 I caught some of E4's new show Fonejacker and was suitably impressed. It was only by chance I came across it late at night while channel hopping. After seeing the trailers I didn't really think the comedy prank phonecall show had much potential - but the programme makers have done a great job presenting it in a novel way using a mix of live video and animation during the prank calls.

Of course the success of the show hangs on the prank phonecalls themselves. The Fonejacker presents himself as a number of characters making repeat appearances. One is an Arab man who pronounces things literally as they a read such as dfs (the furniture store) dvds, vcr and vhs. I found it hilarious when he rang directories enquiries asking for the number for 'duffs' - really D.F.S. My favourite character by far was a Nigerian scammer who rings people up asking for their bank account details. The reaction of some of the people he called was great, especially as the nature of the scam (which was hardly a masterpiece of deception) emerged.

go to www.fonejacker.tv or www.fonejacker.eu
1 Nov 2007 12:36 by dom
he id fuckin cool
30 Sep 2007 03:34 by sweetlou
watch all fonejacker
http://www.fonejacker.eu
15 Sep 2007 03:51 by JohnB
One sketch last night (14.09.07 and probably "Doovde") was the funniest thing since Monty Python. Would never have expected anyone to take to a new level, the telephone hoaxes perpetrated by John 'Culshaw'(spelling wrong?)of Dead Ringers.

I could not hear all of the sketch because I was splitting my sides with laughter. Half an hour later, I burst out laughing again, even though I could not remember a word said in the sketch!! I just didn't know why I was laughing ..

Have urged friends to keep a watchout for a repeat.

Would be VERY grateful if someone could let me know the date and time, if it will be shown again on Channel 4.

Unable to play it again on computers in my local library - librarian thinks those computers are incompatible with your website ...

So-called comedy programmes just haven't been funny in recent years. Began to think it was me and not the programmes. Not having laughed so much for so long, I just hope other comedy programmes will get near the same standard of excellence, without insulting or ridiculing those on the receiving end of the hoaxes.